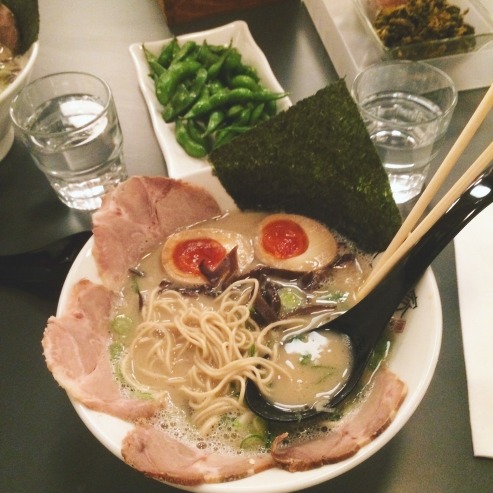 Not the kind that you get out of a packet, albeit delicious. I’m talking silky, fatty, bone marrow-y 14 hour pig broth. The kind of thing that makes my vegetarian mother shrink back in fear from across the table. More technically, what I’m really on about is Tonkotsu broth (the basis for Hakata Ramen). First introduced to this idea by the legendary David Chang, on Mind of a Chef back in 2012, I suddenly realised how deeply I had been swindled by the likes of Wagamama’s and Hare and Tortoise over the years. No longer must I confine myself to the weak and watery depths of their ramens.

Compared to any chef or ‘ramaniac’, I obviously know nothing about the history or diversity of ramen. But, like so many others my age, know what I like, want what I like, and am willing to put in the time and money to find it. ‘Millennials’, as we are dubbed, have the world at their fingertips, and with all that within tantalising reach we’re not going to  put up with lacklustre broth. We demand more, and following the ‘ramen-boom’ of the 90s and 2000s, it seems we came at just the right time.

I live in London, and I can tell you that it is currently a pretty decent location to nurture one’s taste for all things pig. The better-known ramen spots include; Kanada-Ya in central (uses Burford Brown eggs for which I give it extra points), Bone Daddies and their 20hr broth (which I must admit was maybe too rich and lacked nuance), Koi Ramen Bar in Brixton (all round very good and helped by the lively atmosphere) and Shoryu Ramen (varied dependent on location). It’s clear that Londoners like ramen, it’s cheap, it’s fast, it’s bloody delicious and it’s Instagrammable. And that’s everything a Gen-Yer could ask for, right?

Tonkotsu, and the ramen-craze more generally, is the grown-up, sophisticated version of instant noodles. We get to keep all that intense umami flavour (could it be the MSG?), but with the seamless balance of wood-ear mushrooms, spring onions and chasu pork.

If anything was going to be a signifier of the millennial generation, it would likely be the self-declaration of foodie types. Now I admit, a lot of us will proclaim such devotions and be seen scoffing a BigMac the next minute…I blame the alcohol…but I do truly believe that this inclination to  seek the biggest best new thing is leading us to some really great grub. Okay, so maybe that’s not the epiphany that you were expecting, but its good food, good flavour and good culture, and that’s good enough for me.

NOTE: I regret to say that the best tonkotsu I have ever experienced I will likely never see again for; 1. It was in Melbourne and 2. The name of the place was written in Japanese and I would be hard-pressed to remember even if I hadn’t been several Sakes down.

For more about Ramen, head over to my bible, Serious Eats.